In August of 1999, freelance photographer Michael Clancy captured a remarkable image: The hand of a 21 week-old prenatal baby holding a surgeon's finger. Clancy thought the photo might win a Pulitzer Prize. Instead, the picture has generated a lot more controversy than awards. 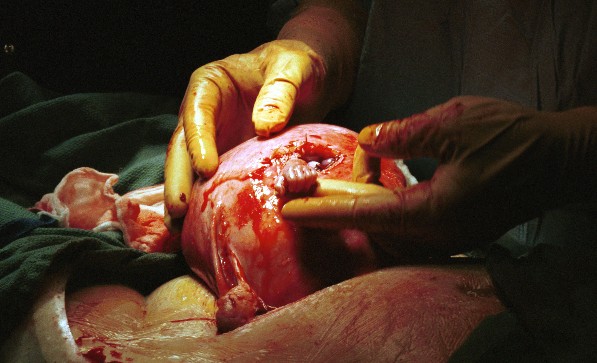 The hand of Samuel Armas outside of his mother's womb at 21 weeks gestation. A full term
pregnancy is about 40 weeks.

What Michael Clancy refers to as 'the experience of a lifetime', began last summer when he received a phone call from USA Today. The national newspaper asked him to photograph an innovative surgery being performed on prenatal babies with spina bifida. Spina bifida is a condition where the baby's body fails to properly enclose the spine during prenatal development. Doctors at Vanderbilt University Medical Center have developed a corrective procedure that begins with opening the mother's abdomen along the bikini line, withdrawing the uterus, and placing it on top of her stomach. Operation on the baby commences after the doctor cuts a hole in the uterus and drains the amniotic fluid. The surgeon encloses the spine by stitching the skin around it using sutures thinner than a human hair. The amniotic fluid is then returned to the uterus and the womb is placed back in the mother's body.

Clancy accepted the assignment from USA Today, and a few days later found himself in an operating room at Vanderbilt. The surgery lasted for an hour. Clancy shot nine rolls of film, averaging one picture every 11 seconds. It was near the end of the surgery when he captured this striking photo.

Excitedly, Clancy acquired the services of a photo agency to see if Life magazine would like to publish his picture. The response he received shocked and angered him. Clancy says that Life expressed an interest in buying his picture, but only for the purpose of eliminating it. Life magazine is owned by Time-Warner, a 27 billion dollar corporate conglomerate that owns an assortment of high profile media and entertainment interests such as CNN, HBO, Sports Illustrated, and Time. Michael Clancy's claim has been confirmed independently by a source who wishes to remain anonymous.

These are the words that Clancy said he heard from the photo agency that was negotiating the sale of his picture to Life. Clancy had been struggling to earn a living as a photographer for 13 years. He had earned $7,900 the previous year and was deeply in debt. Although he needed the cash, his immediate response was: "Bad choice of words. No way. Not for any amount of money."

Aside from taking pride in his work and wanting it to be published, Clancy had another reason for refusing to sell out his picture. He wanted the picture to be seen by as many people as possible because it provided a miraculous glimpse of life in a mother's womb. Prior to the photo shoot, Clancy considered a fetus to be purely a part of a women's body, and felt that if she wanted an abortion, it was nobody's business but her own. Clancy states that what he saw that day in the operating room changed his opinion immediately.

The reasons behind Life's desire to kill Clancy's picture remain uncertain. A short time before Clancy took his photo, a photographer on assignment for Life took a similar picture. The key difference between the two photos is that Clancy's was captured in the blink of an eye and the other picture was planned out and posed for. Life published the picture taken on assignment for them in the December 1999 issue of their magazine.

Clancy's picture first gained national prominence when cyber-reporter Matt Drudge attempted to present it on his Fox News Channel TV show. Drudge had planned to show the picture, talk about the surgery, and ask a rhetorical question along the lines of, "If we are doing so much to save the life of this baby, why are we deliberately killing others?" Fox News forbid Drudge to show the picture, stating that the picture was of a spina bifida surgery and could not be used in the abortion debate. Drudge stated that he would not be censored and refused to do his show. Consequently, Fox cancelled Drudge's show.

Life magazine selected the photo that they published as one of the top pictures of the year. In the caption beneath it, Life asserts that the photo, "became the center of a controversy when the Fox News cable channel canned talk-show host Matt Drudge." Ironically, it was not the photo that Life published, but the one taken by Michael Clancy that was at the center of the Drudge/Fox News controversy.

The Columbia University Graduate School of Journalism administers a prestigious award for magazine photography under a grant from Life magazine. Columbia selected the picture that was published in Life as one of the top photos of the year. Clancy's picture could not be entered as a candidate for this award because it did not appear in an American magazine, which is a requirement for eligibility. Newsweek purchased the rights to Clancy's picture during late 1999, but they never published it.

Clancy's picture did win an award from the University of Missouri School of Journalism. More important to Clancy than formal recognition is that the photo receives exposure. He is optimistic that as medical science advances and people are exposed to pictures such as his and the one that appeared in Life, there will be a great reduction in the millions of abortions that are done yearly.

The issue of partial birth abortion also has implications for the upcoming congressional elections. In 1998, Congress tried to pass a federal law prohibiting partial birth abortions, but the legislation was vetoed by Bill Clinton. The House of Representatives was successful in overriding Clinton, but the Senate fell 3 votes short of the required 2/3 majority necessary to override a presidential veto.

Note- Samuel Alexander Armas was born without complication in December of 1999. According to a web site that contains a picture of Samuel at ten weeks after birth and a letter from his Mom, Samuel's "brain continues to appear normal on ultrasound", and "[t]hough he has little movement of the feet and ankles, he is achieving all the appropriate developmental milestones."

Medical Note - The rate of occurrence for spina bifida is considerably reduced when mothers take a folic acid supplement during their first 6 weeks of pregnancy.