U.S. productivity growth, the greatest determinant of living standards, has been lower for the past five years than any five-year period on record except for 1978–1982. New data from the U.S. Bureau of Labor Statistics shows that productivity growth has averaged 0.6% per year over the past half-decade. This is 73% below the average of the prior six decades, which is as far back as this data extends. 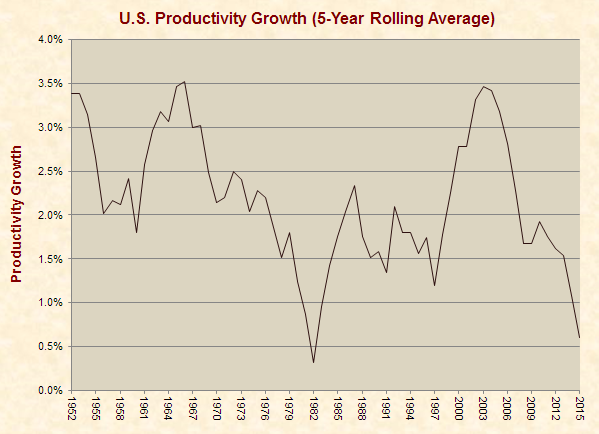 The importance of productivity growth has been described in blunt terms by:

Productivity growth is especially vital for people with low incomes, because low-wage workers in highly productive nations have much better standards of living than their peers in less productive ones. For example, McDonald’s workers in the U.S. can buy about 2.4 Big Macs with their earnings from an hour of work, but this drops to:

This amounts to a stunning 500% premium in purchasing power in the U.S. versus Latin America. As detailed by Princeton economics professor Orley C. Ashenfelter, McDonalds’ workers across the world perform the same jobs with the same levels of productivity, but because they live in nations with different levels of productivity, these workers have vastly different standards of living.

Concurrent with the recent collapse of productivity growth, three major impediments to it have reached record or near-record levels. These are government debt, regulations, and the immigration of low-skilled populations into the U.S.

Government debt harms productivity growth because it diverts money away from investments in technologies, equipment, and structures that increase productivity. Per CBO, when “people hold their wealth as government bonds rather than in a form that can be used to finance private investment, the increased debt will tend to reduce the stock of productive private capital.” CBO has also explained that this same mechanism lowers “aggregate wages,” or the total wages earned by Americans.

Since 2008, federal government debt has grown at a faster rate and to higher levels than any time in U.S. history except for World War II. From a long-term perspective, the current national debt situation is palpably worse than in WWII, because the latter quickly declined once the war ended, while the former is on track to permanently eclipse anything ever seen in the history of the U.S.

Another major obstacle to productivity growth is laws and regulations that prohibit people from using cost-efficient means of production. People have an innate motive to minimize their costs and maximize their productivity in order to optimize their income, but governments often restrict this to achieve other goals. Such mandates also divert people from work to comply with red tape.

The costs and benefits of regulations are notoriously difficult to quantify, but several objective (though imperfect) measures indicate that federal regulations and their effects have reached new heights in recent years. Significantly, U.S. productivity growth also collapsed in the wake of a major regulatory expansion in the 1970s.

An added factor that weakens U.S. productivity growth is rising numbers of low-skilled immigrants. As documented via multiple studies in a report by the U.K. House of Commons Education and Skills Committee, “There is a positive correlation between skills and productivity,” and “lower levels of skills” lead to “lower output per employee.”

Over the past half century, both the number of immigrants and portion of them with low skills have greatly increased. Between 1960 and 2014, the percentage of U.S. residents born in other nations rose from 5.4% to 13.3%, the highest level in 104 years. Per the encyclopedia Immigration in America Today, “the 1965 Immigration and Naturalization Act dramatically changed the immigrant composition in America” from “almost entirely working-class” to a mixture of “highly educated and trained workers” and “a large group” of “low-skilled and under-educated immigrants” that “rose in numbers and in percentages in the 1980s and 1990s.”

Skilled immigrants can also impede productivity growth if their English is poor. A 2014 study by the Brookings Institution found that “high-skilled immigrants who are not proficient in English are twice as likely to work in ‘unskilled’ jobs,” and this “represents a loss of productivity that yields lower wages for individuals and families and lower tax revenues and consumer spending for local areas.”